A great part of fuels contain non-combustible ashes, and for low ranking fuels and wastes this non-combustible fraction can become quite relevant; the traditional combustion of these fuels (in reality not all can be used in traditional processes) produces, in any case, slag that in small part accumulates at the bottom of the boiler (bottom ash) while almost all is carried away by the fumes (fly ash) from which it must later be separated out. The produced slag contains carbon, is not inert (if treated with an even slightly acidic solution it releases heavy metals) and must be treated as waste; the cost of its treatment and disposal is a function of its characteristics and of the regulations in force in a country, but in any case such slag cannot be recycled to productive uses unless further treatment processes are carried out.

One effect of “flameless” combustion is the different treatment of non-combustible ashes; in the case of flameless, the non-combustible particles melt and form, inside the reactor, a “fog” of minuscule liquid drops that coalesce and precipitate onto the bottom of the reactor, forming a stream of liquid slag; the reactor is slightly inclined and the stream of liquid slag (melted) drains out of the reactor, precipitating into a stream of cold water that instantly solidifies the melted jet, which breaks up into vitreous pearls that are collected downstream. The pearls are totally inert, do not contain carbon and can be reused for industrial purposes. Instead in traditional combustion the carbon present in the slag is not burnt, thus the combustion efficiency is lower than that of “flameless” combustion, a further advantage of this latter technology. 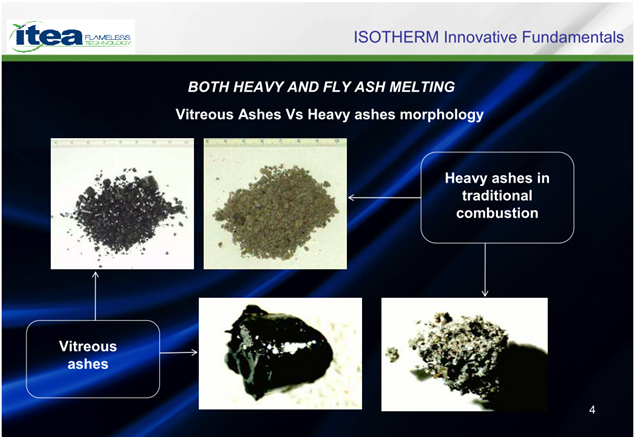 SOFINTER Group is constantly seeking for new resources to employ in its Companies.

Visit the press office to search for the Group's latest news and press release archive.

This site does not use profiling cookies. Instead, technical cookies are used, including from third parties, in order to improve the browsing experience.
By clicking on the "Reject" button, you will close the banner without giving your consent to any cookies, except for the necessary ones. For more information click here

Strictly Necessary Cookie should be enabled at all times so that we can save your preferences for cookie settings.

If you disable this cookie, we will not be able to save your preferences. This means that every time you visit this website you will need to enable or disable cookies again.

Please enable Strictly Necessary Cookies first so that we can save your preferences!