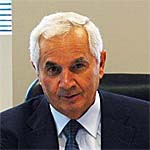 Giampietro Tedeschi, born in Carrara in 1944, is the Chairman of Itea.
He took a degree in Chemical Engineering at the University of Pisa and began his career in 1971 in S.I.R. Società Italiana Resine, where he played increasingly significant roles, becoming, in 1978, the Start-up Manager of the Company.

In 1979 he started the activity of entrepreneur by constituting Commissioning Company Srl, a dynamic reality which became popular on the market for the supply of start-up, operation and maintenance of large plants, in particular for the production of electricity and for sea water desalination.

In 1987 he founded Sofinter, where performed various roles including Chairman.

SOFINTER Group is constantly seeking for new resources to employ in its Companies.

Visit the press office to search for the Group's latest news and press release archive.

This site does not use profiling cookies. Instead, technical cookies are used, including from third parties, in order to improve the browsing experience.
By clicking on the "Reject" button, you will close the banner without giving your consent to any cookies, except for the necessary ones. For more information click here

Strictly Necessary Cookie should be enabled at all times so that we can save your preferences for cookie settings.

If you disable this cookie, we will not be able to save your preferences. This means that every time you visit this website you will need to enable or disable cookies again.

Please enable Strictly Necessary Cookies first so that we can save your preferences!